After tompa’s been working there for a couple of months and have been talking about the joys of snogging me and Laxen managed to drag our tired asses there. Met by hoards of young girls swooning over Tompa we decided to go for the all inclusive extravaganza

See how happy Laxen is – either its all the snog or just all of the pretty, young girls sitting all around him. Either way he is trying the all innocent blonde look 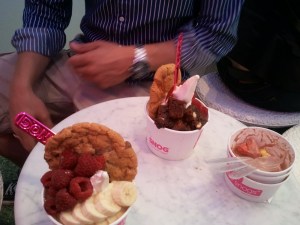 well, snogging is supposed to be healthy but when you look at this cookie monster you know you’re in for a ride.

Bank holiday weekend (again – feels like we dont do much more than have those 3 day weekends) and this was one was, just as previous ones, all about fun and games.

Since my wing man Elin tried out grown up life for a weekend and stayed in, went to a wedding and to the country side I was left to fend for my self. Not by myself though since I had Kix, Laxen, Liin and Mark by my side for fridays partying and the old crew with Dani, Kirsten, Eric and Hjalle for saturday. Sunday was movie night and early in bed.

Laxen and Liin went as black and white.

Laxen proved that he can indeed down a beer in no time. First time I met him he did this trick and i was duely impressed.

Little doll Bea got a man to switch t-shirt with her. To bad she didnt want to return it afterwards. Best thing about this was not the semi naked man/model but this conversation: 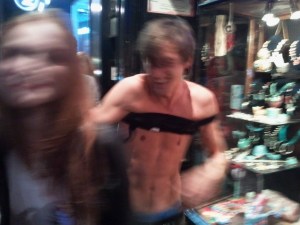 Unfortunatly non of us would stick on more photos than this from the weekend which I would say was sort of fail since we had loads of fun.

Raffles tonight with the usual suspects minus Elin and plus 8 young, rich and gorgeous canadian girls. Sweet! Me, I’m planning to look proper and somewhat boring this weekend to make up for the bank holiday madness. I’m still on guy lock down so no talking to anyone except for people I know and love. And maybe that bearded older man if he’s around, at least to take a picture of me and him and send to Ida. She would wet her pants for wes anderssoness of him.

Kix, Mackan and me owning the pole at Raffles. You can see at my vampire eyes that its past midnight and night time me is out. 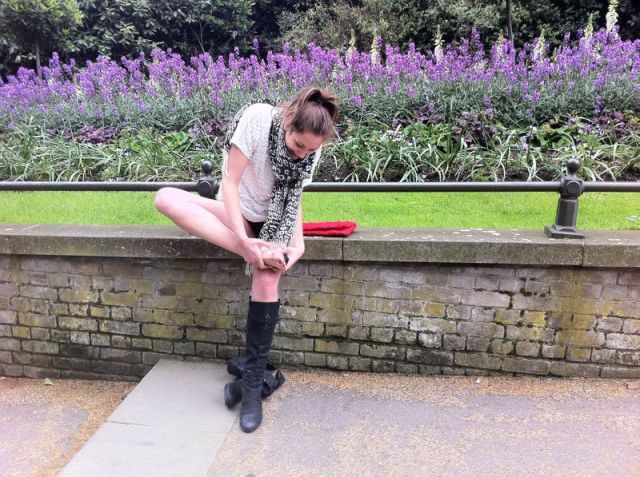 Day time me generally have to pay for night time me’s mistakes. Walking home in high heeled shoes through Hyde Park is just not very nice. Good thing Sven made me and Kix pizza and that i got a bed all to myself that night so I was both well rested and well fed (well, everything is relative) and that I had Kix by my side to lend me a scarf.