Me and Sanna are dressed up as two 16 year old guys we met when we were out working for Sony Ericsson. 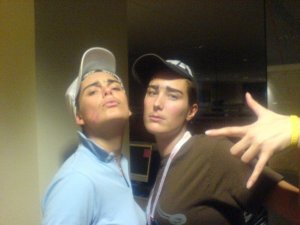 Best part of this story is that I lost Sanna somewhere on the way and when trying to find my way back from Kungsholmen to my hoodies Östermalm I accidently ended up at gallery opening. They actually thought I was a guy and for some reason gave me a hammer (!). Finally I found my way back and when coming to Stureplan I saw my at the time boyfriend Magnus. Happy to see him I decided to give him a scare so I run towards him with the hammer held high. The guards at one of the nightclubs thought me being a crazy 16 year old boy and wrestled me to the ground. That was the end of that night for me. And todays wisdom is – dont accept hammers from strangers.

Here I’m dressed up as the epic tennis legend Björn Borg. This night ended with me and Magnus going to Sthlm nightclub V and being the amusement for a hen night party. One of the bridemaids tried to kiss me thinking I was a man.

And Sannas friend thought I was a guy even after talking to me all night as below conversation tells. What can I say, I would be wicked as a Cecil