Back at work and in living life after a couple of days as a zombie. Not pleasant. I’ve never liked zombie movies. So, how to spend your days when you are more dead than alive? 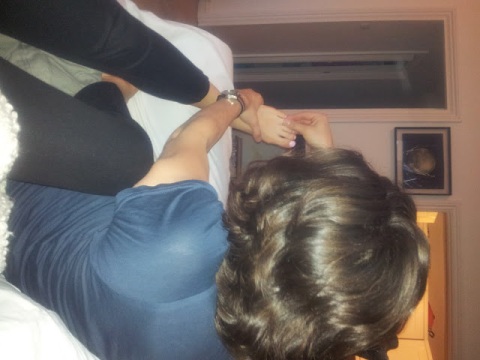 I made Oliver give my cheesy smelly feet massages.

When i was feeling better we ate at the polish restaurant Malina. Me not eating bread got my soup in a ‘bread bowl’ didnt know i had to take it so literally. 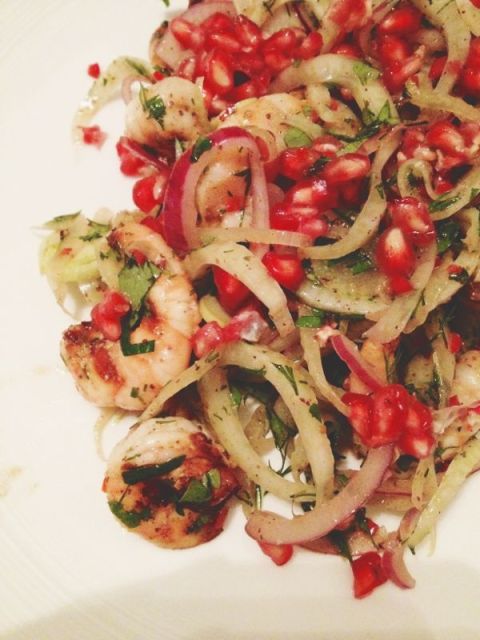 Sick in bed. Bored. Head and joints hurts and i think of dad as i always do when sick. My dad being sick is my childhood standard of being sick. Moping around in a robe with the nose smeared in white paste looking like the end of the world.

Im not more stylish, no one does sick pretty. I lay here and stare at the wall. Too tired to move, too ok to sleep. No food in the house and i choke on lemsip. That shit taste vile.

I have downloaded movies but too tired to bother. My head still hurts.

Autumn is here. It rains and is 12 degrees out. Im in wellies and hood jacket. Good thing that baby bro booked the wrong flight since he missed the shit weather. It was still nice for him being here. Lets say he brought the sun, or maybe that sky started weeping when he left. It was so nice having him here, he hugged me and made me feel secure the way only family can.

We went out for dinner on friday. Kebab and stuff. Brother was happy. Man food.

Then we went to a weird gig were the guys took of their shirts and played pling plong music. I was happy, nice view.

Drinks at an east bar in Dalston. Brother being manly with absinth and whiskey. Ben not so much with rhubarb and minth.

Mine was alcohol free. Im still on it.

Out and about and on our way to open house London when you can get into lots of otherwise closed buildings.

We choose freemasons for Dad. 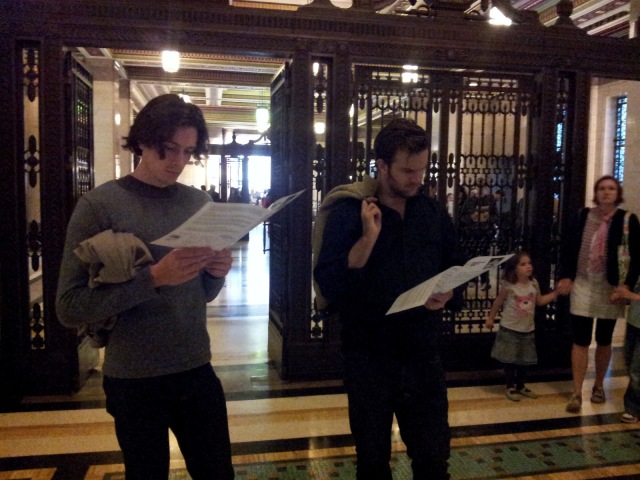 Fitting for a king. I think it actually was. 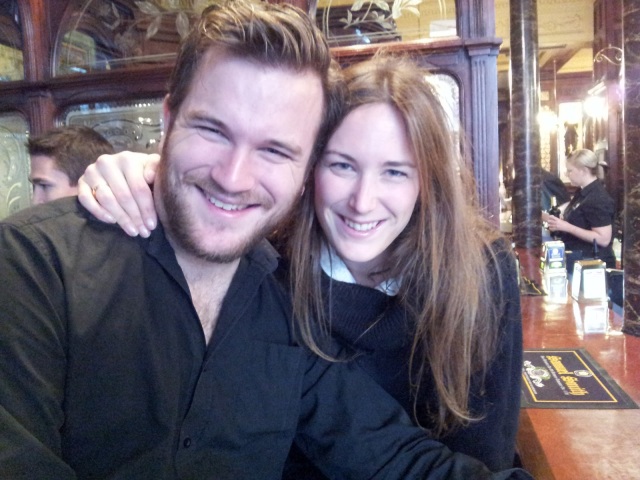 Brother desperately needed ale after this so we took him to a pub.

and then to a mongolian barbeque.

Took a long time for the pot to boil. We were hungry.

Its not beautiful eating…

Waited up until brother had to leave. Playing carcassan.

Sunday was a miserable day. We stayed in bed until 3 before we went out for a sad walk.

We ended the evening by starting Oliver’s drawing project. Apparently you are supposed to be able to draw after a couple of weeks. This was the initial try of a self portrait. I feel I have a long way to go.

Little brother came yesterday. That was amazing. First me and Oliver went to the place God forgot – Clapham, to eat at an amazing Vietnamese restaurant and make fun of the claphamians. A very nice way of spending a thursday night. Especially the make fun part made us feel very good about ourselves. 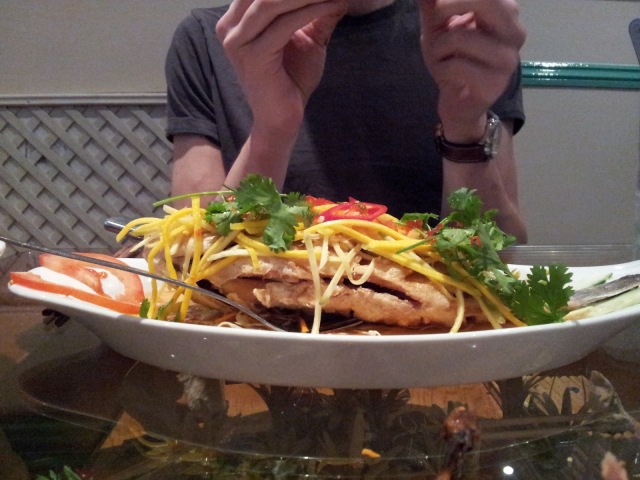 A man behind a fish. A big ass fish. 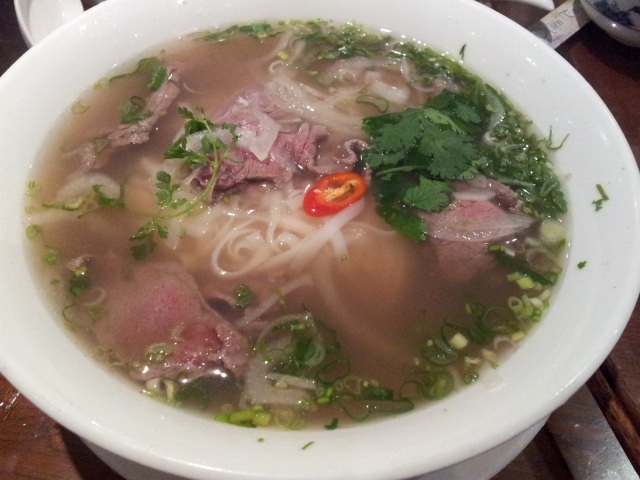 Pho. Noodles and beef. Reminds me of traveling asia living on soups like these. Except there was no beef and hardly any noodles. 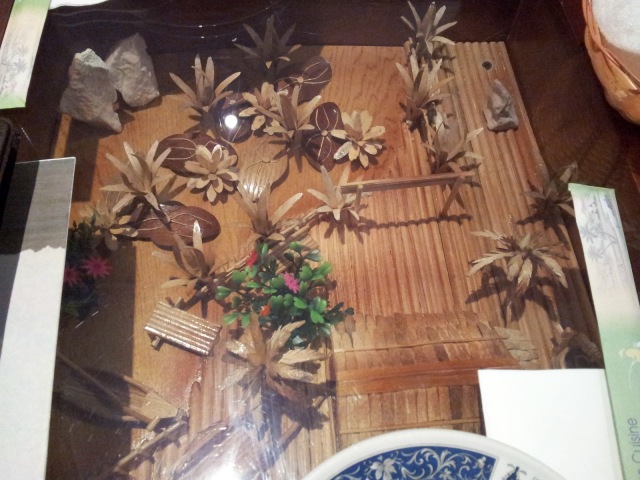 Table with a tiny village inside. Mini people village.

Oliver wouldnt speak to me, he just fantasized of all the mini people. 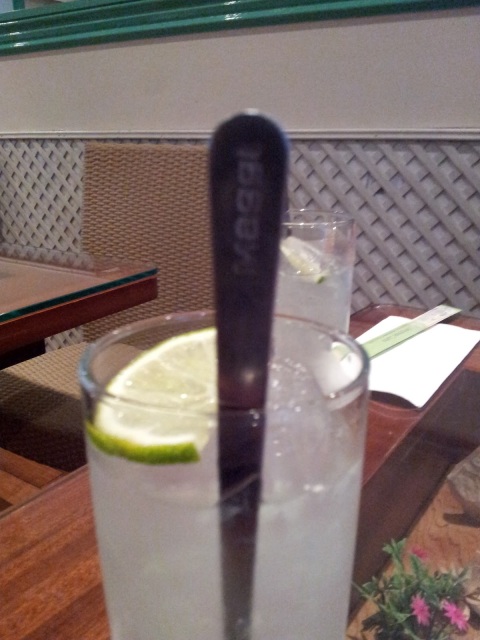 Maggie was there in spirit.

Fried squid for starter. In Olivers book this so go with a detox. This whole dinner was detox fail. Well, ine glitch doesnt count.

Honey quail. Why not?

When we came home Oliver wanted to draw how self portrait. That needed a set up. The light is very important when you are creating big art.

Tonight baby bro is coming. True to form he fluffed the flight home and leaves at 6am on Sunday. Not surprised. He comes late tonight so we’ll just feed him and then head up for a gig Friday night in Dalston. For the rest of the weekend I just want to hang out. Feels like ages we actually had time together and not crazy wedding planning and the likes.

Other than that, not much new under the sun. Autumn is coming, its getting chillier. In a month I’m in NYC and both Julia and Bella have planned trips over for the fall. Oh, and tonight we are eating vietnamese. Pretty good. 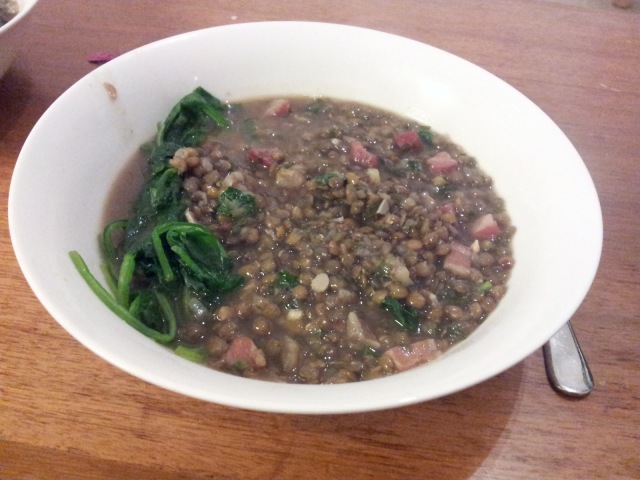 On tuesday we made lentil soup. Shit i can eat. Kix named it Fjällrävensoppa. I think it looks like something a vegan lesbian would eat. It was yummy.

We celebrated Tom turning 32. Old man. I promised him many more night pole dancing at Raffles. I hold to my promises. 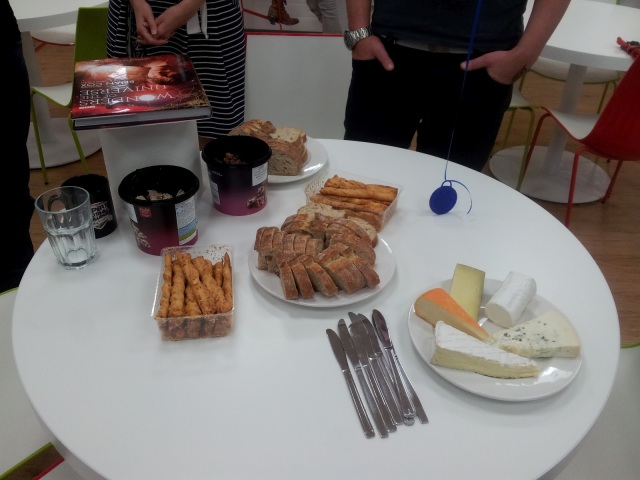 Cheese instead of cake. Love my work and Tom’s birthday. 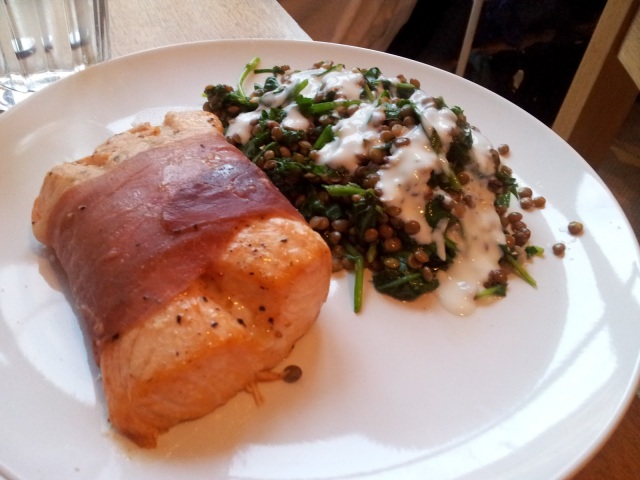 We had lots of lentils left so dinner was an upgraded version of the day before.

Natures candy. That’s what you get when you are on a home made detox/weird diet to find out what’s wrong with my stomach.

Oliver went off handsome in a suit. I curled up on the sofa watching True Blood.

Today autumn outfit in burg and my acne boots.

I went to the doctor to check up my stomach – bit of a fail since this was a registration appointment and she didnt want to hear about my stomach. Only my height, how much i exercised and if i smoked. Guess i’ll have to go back. Failure was met by winning when Oliver and me went to the Havelock to eat lamb salad. I tried to get a good picture for my other blog project but that was a fail. Again.

Looks like I have a gigantic, white baby in my lap. 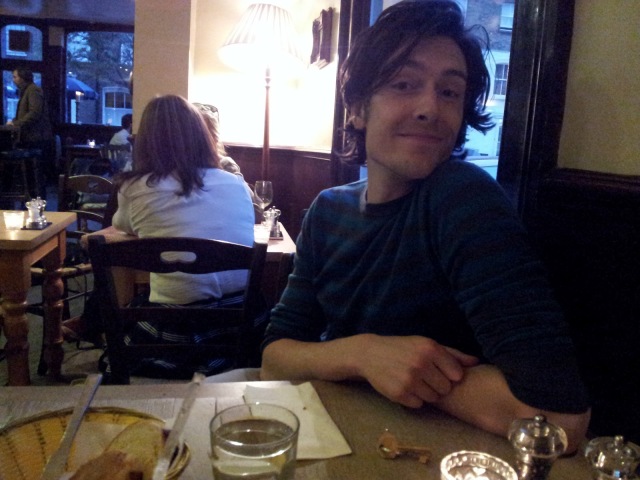 Thats a man who is happy that he gets the entire bread basket to himself.

Doesnt make the food justice. It was delicious.

I have survived my first week of detox. It’s been good. I do feel calmer and more in balance. Today going to the doctors to double check my stomach and liver and then hopefully well equipped to meet the fall.

I’ve been alone for a week and that’s meant lot of time to myself, reading the amazing Way of Kings and watching True Blood. Also meeting Kix and Dani. And walking. For hours. Conclusion of thee weekend – we are too young but also too old. To young to give up on our dreams, our passions, but too old to not see them clearly.

This guy is just weird. Love him. 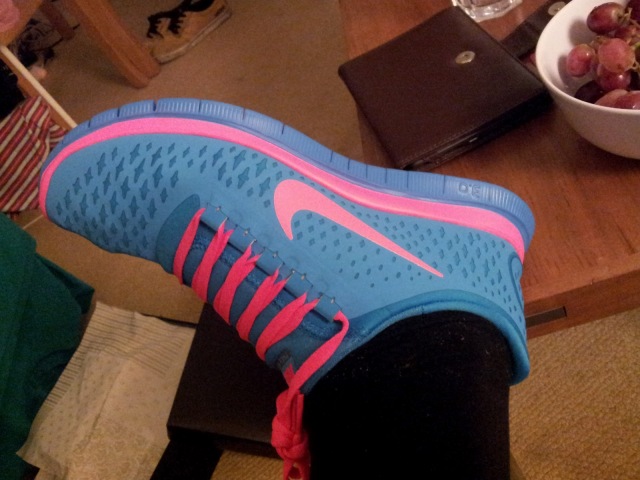 My new shoes finally came. They are like brightly coloured socks.

I was laying by myself in the park reading books. You can spend your weekend in worse ways. 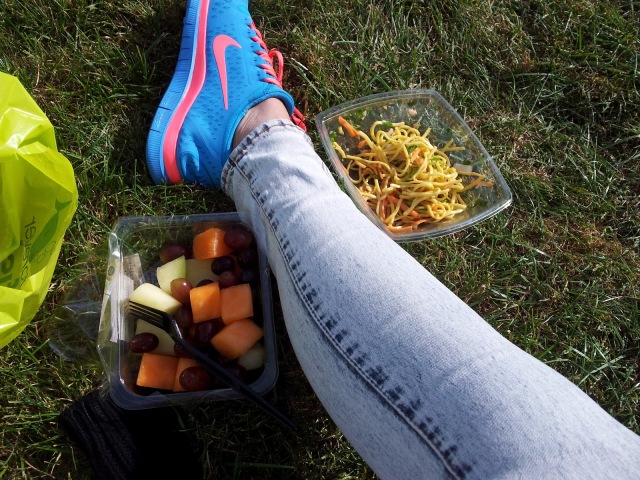 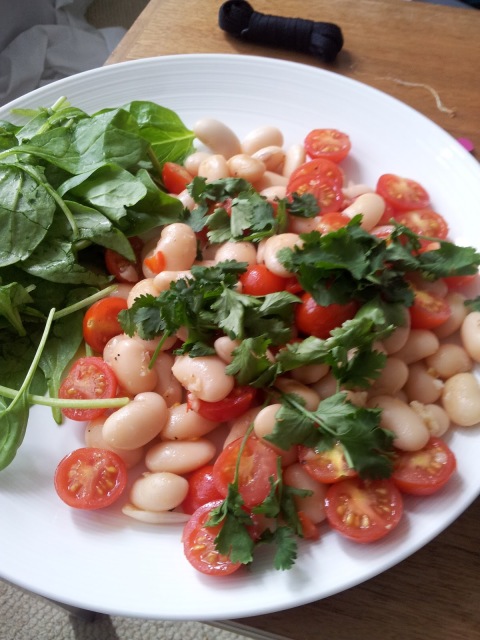 I came up with some creative food options. Here fried butter beans with garlic, chilli and coriander. Surprisingly good

Monday morning. Oliver is away for a week and I’m starting my detox month. No alcohol or sugar for a month and proper detox food for a week. Today eating fruits and vegs. Cant say its helping yet.

This needed a blow off this weekend. On Friday drinks with work and then dinner with Oliver.Nice burmese restaurant. Unfortunately my hung over hit already when I got back from dinner. Stupid hung over. 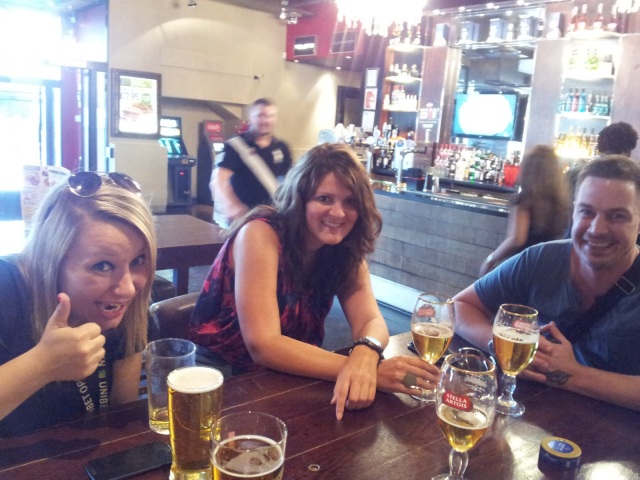 On saturday we headed out into the park after one of those slow morning in (all of our mornings are slow morning, we are a disgrace but im thinking ‘why not’.)

Oliver made me finally give in and play chess. I won. He said that when he tells this story he let me win. We both know that is not true. My background as chess champion in Sthlm showed itself.

Before heading to Kix and Robins Oliver painted a cherry spitting portrait of me. 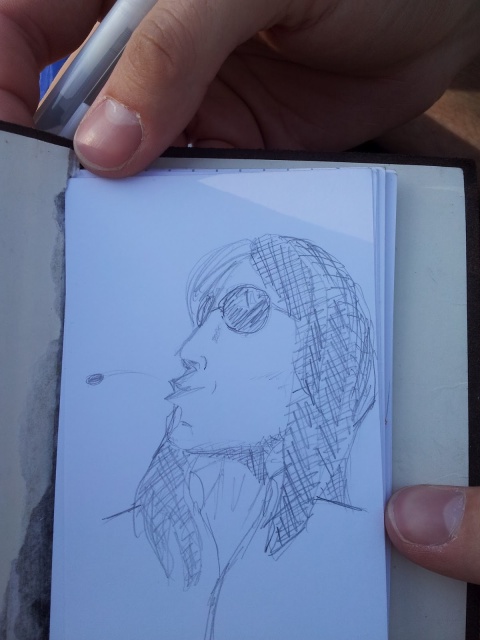 After drinks and food in the Chiswick garden we headed to Maddox. Great party and as usual too much vodka. 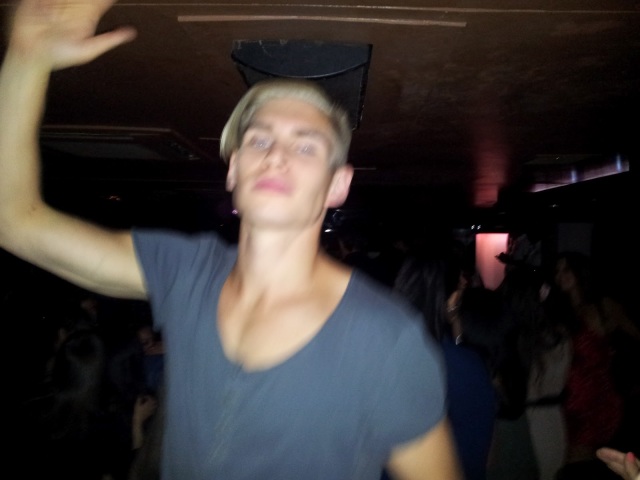 By 2 I was home waking Oliver up with crisps in bed. 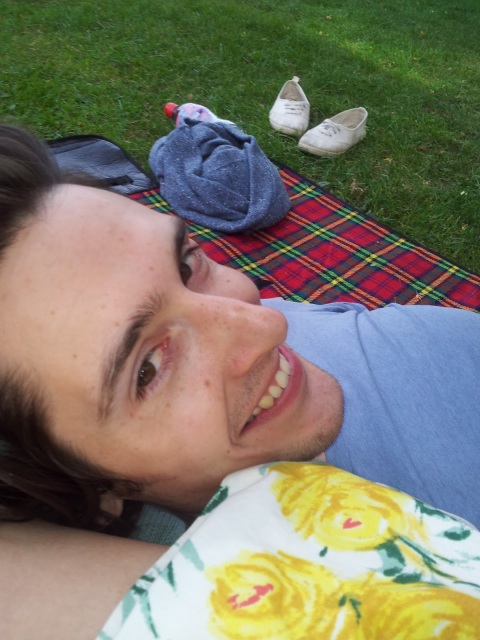 Sunday – another day of park life. Ate everything Im not allowed to eat at the moment. Very good.

Took a walk along the rives by myself yesterday. It was very beautiful and a nice evening for walking and thinking. Didn’t solve any world problems but felt deep in my stomach that this will be good autumn.

The sky and the Thames were candy floss pink.

An old couple were watching the sunset together, in complete silence. That made me happy, they looked so sweet.

Felt a bit jealous of the kayakers being out.

Me and Lisen went out to ‘Cath life’ as Lisen say’s yesterday. Catching Life is best done by dinner at Carluccio’s and drinks at Apres while listening to Mexican salsa tunes and weird guys with self recording equipment in their shoes all while catching happy hour cocktails.

It was a splendid evening even if I felt my years when Lisens friend asked me what i did and I told her I got transferred over by my job three years ago. She looked at me and said, with big eyes, ‘dont mind me asking but how old are you really?’ I guess three years is a long time for someone straight out of school. 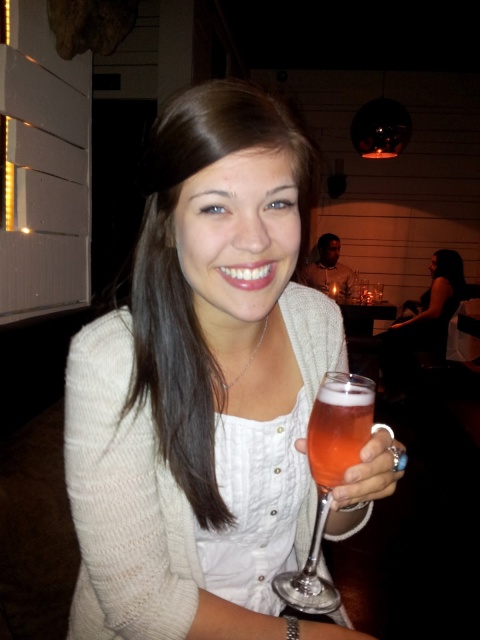 Lisen and a Rhubarb dream of a drink.

Tall dark and handsome, dont mind if I do?

Lisen went on to meet kix for karaoke and I had to go home to let Oliver in. I was very sad since I felt my life needed som Dr Jones karaoke action but today i’m quite happy about it.

On the tube home I decided to start a detox month from Monday. No alcohol och refined sugar. Need to help my stomach a bit.