We are having a bit of an indian summer here in England and there is another heat wave coming over the weekend. So ive decided to let the pool have one more weekend of glory before tucking it away.

Even if its been paaaaaainful waiting for our holiday im now NOT sorry about going on holiday when everyone else is coming back. And then im off to NYC for a couple of days in October for work before Ibiza for Danis wedding. The NYC trip is a conference/summit and the company running it are treating me to the full VIP – paying for the trip and hotel. Im staying at the Moxy in Times square.

And yes, it totally makes me feel VIP. People actually pay me to go to NYC. 22 year old me could totally not see this coming. To be fair, 22 year old me didnt see herself being boss woman over 40 people and actually having to take real decisions either.

London is starting to look like autumn. Its cold in the mornings and evenings now. Loving it.

Woolly came to work with me. Contributing as always. 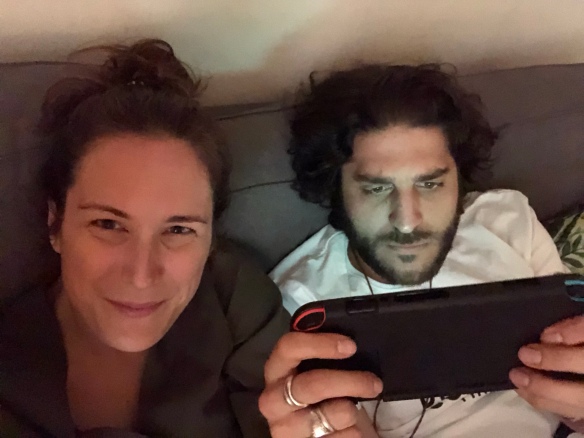 Standard evening in the Munstev/Krunte household. George on his switch and me reading.

And yeah, Woolly cuddled up as close as he can get. We’ve decided to not turn on the heating until we are back from Bulgaria so im struggling with needing blankets and all the human/dog heat i can get at the moment. Im so weak.

Got to light my candles. This kind of looks like an altar to Han Solo. I mean, why not. SW is still the reason we met so maybe we need an altar to the god of Star Wars.

Off to vote this afternoon and do my human duty. I say human because its one of those elections. The ones that create history. Or in the words of Joel Kinnaman.

I agree, dont start down that route. We KNOW where it ends. Between the hate and division this creates there is less room for the things that makes a society blossom. And it scares me that a party that wants to limit women and LGBTQ rights are set to maybe become the second biggest party in Sweden. I also stand behind helping refugees and accepting immigration but its harder for me to talk about since i havent been in Sweden for the last 8 years and cant tell the impact of the last couple of years. But i know for sure that going backwards on human rights is never the right things to do.

As ive told you before, my vote this election goes to the party i think has the biggest chance to work against the right wing party in Sweden.