Had a bit of a scare last night. After my second injections my abdomen started to hurt really bad. Like doubled over, crying from pain bad. And those of you that know me knows that pretty bad.

George was out but when he came back he called the hospital and they told us to go to the A&E. We spent about 2h there but there wasn’t much they could do. Other than me moaning and them giving me some serious painkillers. Since I have a scan this morning I’m going in to see if they need to put me under observation or if it’s expected for this to happen.

I’m taking the day off from work and will just sleep once I get back home. I’m exhausted after 4h of excruciating pain. More than anything, I just want to catch a break. Please body, work with me, not against me. 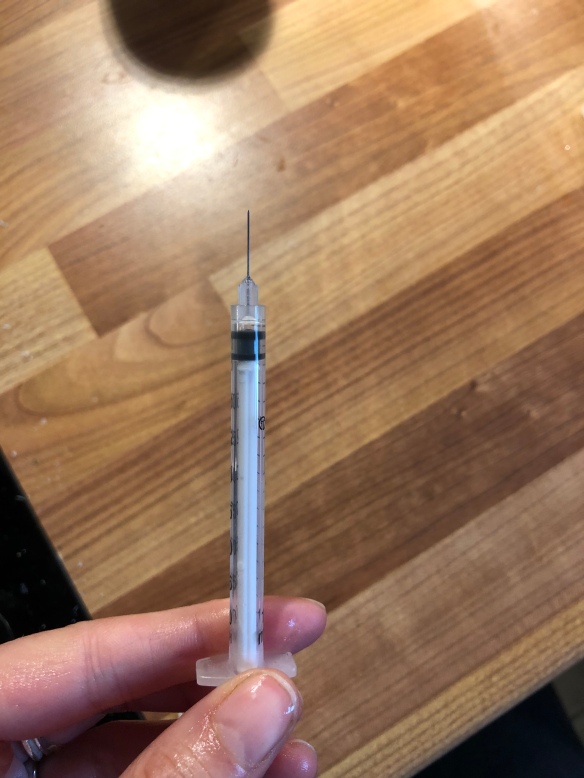 This is my nightly injection. It’s actually not as bad as it looks and you get used to it quickly. But, won’t lie, happy when it’s over.

Coming back from the hospital. It was not fun. Mainly because it’s so scary. Pain is bad but doable if you know what it is. It’s the panic when you have no idea what is going on and worried that something is wrong.

Just come out of the scan (yes, I’m blogging from the hospital, a lot of waiting around…) and all looks good. The pain are most likely from the treatment and I’ve been told I can take codein. Good times.

Currently 14 follicles maturing. That’s good news since that means 14 eggs. If all of them can be collected we’ll hopefully be able to freeze some for another shot. It’s quite a lot more since Monday so might be the reason for the crazy pain yesterday, everything on overdrive. Also took 4 vials of blood. Feel happy and drained and tired at the same time.

So now we are hoping for the 14 follicles to keep working away to make a chance for 14 babies :). Go big or go home.