Now that we heard the heart beat yesterday and im somewhat floating in a happy cloud i thought id actually write down the long, hard and sometimes almost impossible journey that took us here.

It all started a little over a year ago. We were trying and i was tracking my ovulation with one of those apps realising that my period was highly unreliable. Between 26-42 days. Meaning the window for ovulation is like 20 days. That made me realise that even if we’ve been trying actively for 6 months i actually went off the pill almost a year before and we were practicing ‘safe’ sex that well, shouldnt have been safe at all.

Given my age and general propensity for worry i decided to go to the GP and see if he shared in my concern that something wasnt right. He did. So in July we got referred to a specialist.

Worst was the blocked tubes were i was called in to a little room with like 5 other women, told to remove my clothes and put on one of those backless hospital gowns and then sat ass bare on a cold bench waiting to be called. After around 30 min i was taken to a room, still ass bare in the corridors, where i was strapped into a conception and turned upside down for the fluid to run through my tubes. Like the opposite of a fun amusement ride. It was painful and kind of humiliating and so ridicilous i kind of had to laugh when i hobbled back to my clothes, back of the gown flapping and not caring one bit if someone saw my ass.

After weeks of waiting we got told end of August that we might not be able to have kids at all. I had a funny positioned ovary and Georges swimmers were both slow and oddly shaped. They told us George had to live healthily for 3 months and then take another test and maybe, just maybe, we could get another result. With those opposite of happy news we went on holiday. Everyone told us not to worry but how the fuck not? 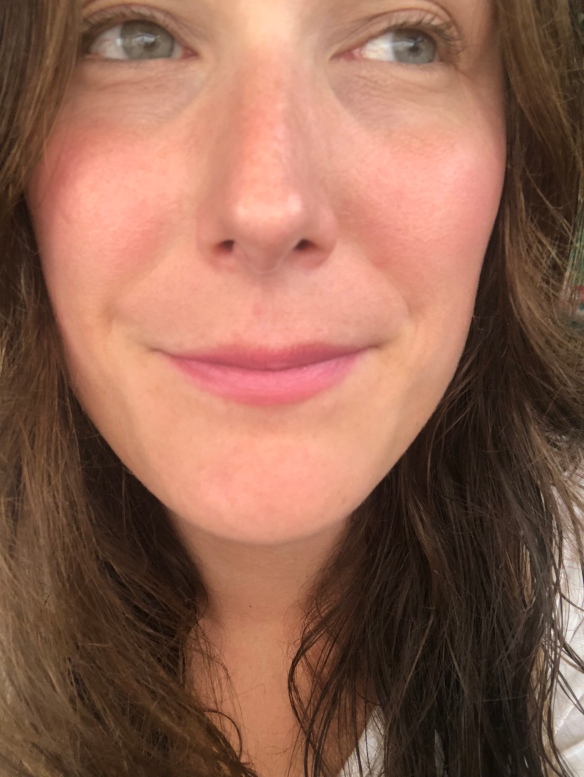 3 months did NOT fly by. The dragged and lagged and felt painfully slow when UK went into winter. By November we did a new test and finally some good news. There was a chance. Not a massive one but still. With ICSI (an even more precise treatment that IVF where you mix the best sperm with the egg) we could hopefully get pregnant. We got transferred to the ivf clinic at Hammersmith hospital and told that we could start the treatment in the new year after seeing a psychiatrist to discuss the treatment.

Christmas was happy times. There was a chance that we could become parents and we spent it at the country house with family and then having one last party in Dublin for New Years.

Coming back we decided to start after we went to Australia. Not an easy choice since we ‘missed’ a month but the counceller told us it would probably help to have a holiday after all that been going on. In Sydney George found ut he was cealiac and that it was highly likely thats partly why the swimmers had issues. Not easy to find out but at least things felt like they were falling into place. He started eating differently and i went completely off the booze. 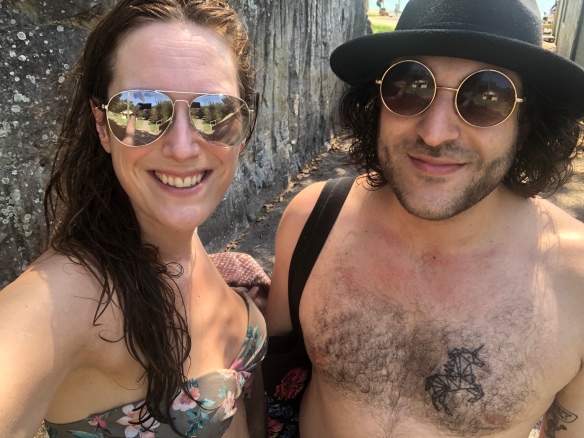 Coming home we had to wait for my period to start the treatment. Of course the bastard decided to wait until the very last day and came after 42 days instead of standard 27. But, 21st of March we were a go. I started taking period regulating progesteron to make sure they could control the period. They made me very sick but hey, at this point it was just a matter of getting by. When i got my period the 16th of April i started the first set of injections as well as daily pills. We went for scans every 2-3 days to make sure that the follicles were growing as they should. Injections 2 times a day had me bruised, bloated and feeling like shit. It also gave me diarreah so any socialising was hard going.

Luckily they worked and after 2 weeks of injections we were ready for harvest. 20 follicles produced 15 mature eggs. I was taken to the clinic, put in one of those backless gowns again but this time i had a bed. When i was ready they rolled me in and put me under. I woke up an hour later and was told that they collected the 15 eggs. Feeling extremely dizzy and happy we walked me slowly out of the clinic and into a cab. 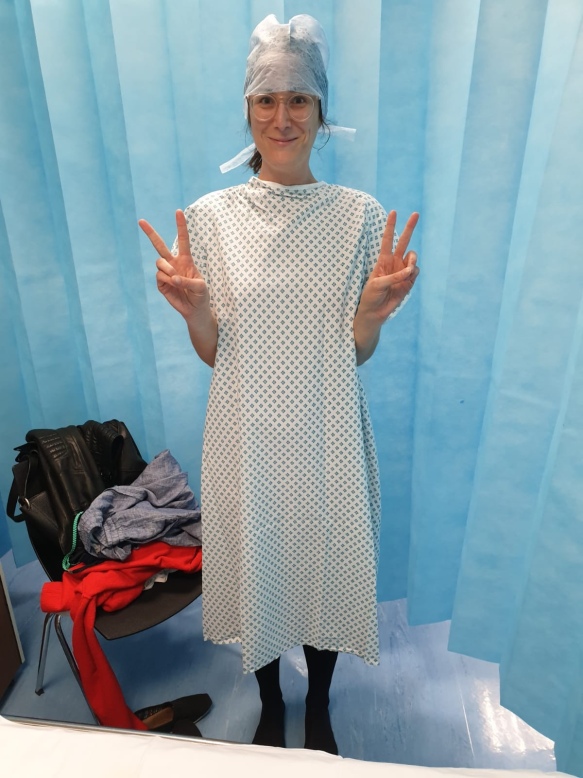 The day after the called us to tell us that of the 15 eggs collected 10 was mature and out of the 10 mature 7 had injected succesfully. Then came a 5 day waiting to see if they grew to blastocyst stage and the quality of the embryo. The little eggs grew bravely and on the 5th of May we came in again to transfer one little fighter back into me. And freeze 4 for the future. Reading the odds for all of these things are not great, they tell you like 50% succeed so we were happy to have the four backups. LIfe was all about seeing the positives and thinking good thoughts to fight my horrible nightmares.

Then followed THE LONGEST 10 days of my life. Living like im preggers but not knowing if it worked. Reading every little sign, trying not to but definitely googling everything and more than anything hoping and even praying for it to want to stay with us.

And 10 days later, on the 16th of May we did the home pregnancy test and got a yes. I was in shock. Just didnt know what to feel after all this time. Happy of course but barely believing its true. Still 30% chance of miscarriage and its hard to believe after so much fighting. A week later i did another test. Just because. Its not easy convince a mind that all is well after years of trying. 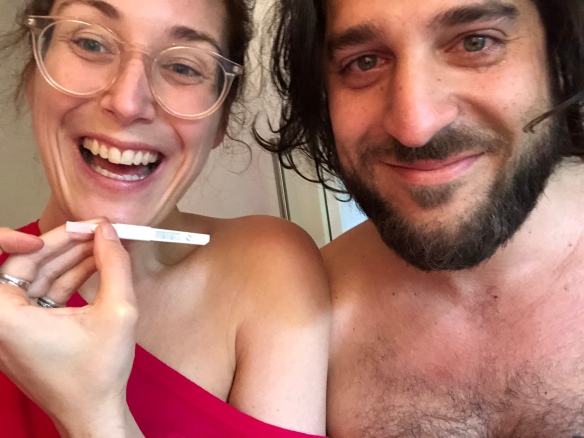 But, here we are. 7 weeks in and hearing our babys heart beat yesterday. A lot can still go wrong but thank god for modern medicine. That can take a couple dreaming of a kid from less than 1 on 100 chance of getting a kid to hopefully welcoming a little baby in January.

NHS have been amazing. It has cost us nothing and everyone along the way has been supportive. From my GP who listened even if we hadnt tried that long, to all the doctors and nurses along the way to the well wishes and good lucks from everyone and the nurse than squeezed my leg and told me she was so happy for me when i told her it worked. 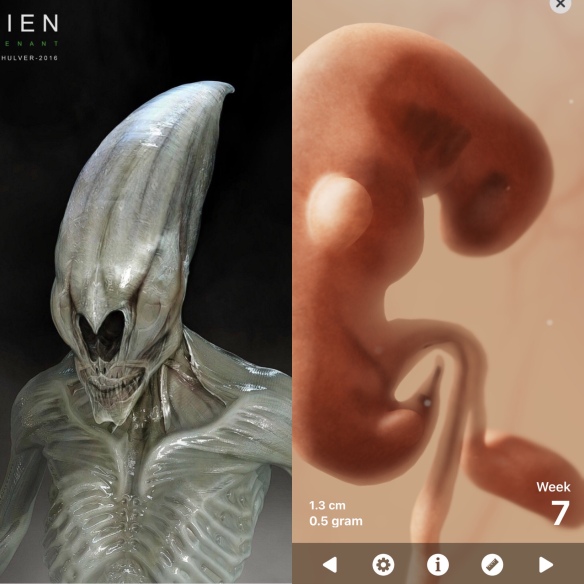 So here it is, little robot baby jeallybean made in lab but extra loved for it. If anyone reads this thinking about getting help i would say do it. It was hard and painful but worth it. If nothing else just for the feeling that there is a chance.